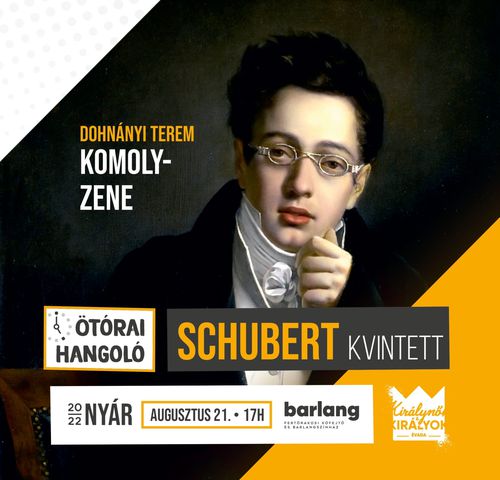 Váltson bérletet!
Afternoon Concerts in the Cave Theatre Fertőrákos with the Chamber Ensemble of the Sopron Symphony Orchestra

At the first concert of the "Tuning in" series, the Chamber Ensemble of the Sopron Symphony Orchestra presents works by Joseph Haydn and Franz Schubert. The overture of the season will be Haydn's Sunrise Quartet, one of the composer's most famous quartets. In Haydn's workshop, the string quartet became one of the most demanding genres in Western music. The Quartet Oeuvre by Haydn and Schubert offers all listeners, all music lovers old and new, rich entertainment in melody, ingenuity and shaping of form.

Carl Goldmark was one of the most successful composers at the turn of the century. The son of a Jewish cantor from Deutschkreutz, he began his career as a violinist in the municipal theatre of Sopron, later settling in Vienna and composing numerous large-scale works. His opera The Queen of Sheba was performed worldwide, including the Metropolitan Opera in New York. His String Quintet in A minor, composed in 1870, is one of his most frequently performed works today.

The third chamber concert of the Sopron Symphony Orchestra features Mozart's cheerful String Quartet in C major (K 157) and one of the composer's most dramatic works, the mighty String Quintet in G minor (K 516). Mozart, who was an excellent violin and viola player in addition to several keyboard instruments, preferred to play the viola at house concerts whenever possible. The viola quintet was composed in 1787 - the year of Don Giovanni - and is monumental in scale, just like the two symphonies in the same key.

Composed in 1828, the String Quintet in C major is one of the most moving pieces in Franz Schubert's rich chamber music oeuvre, and it was also one of his last completed works, composed two months before his death. It was not performed in public until 1850, but today it is clearly one of the most important works in the chamber music literature.

On clear days you can see Dohnányi's birthplace from the cave theatre: Pressburg/Bratislava. Ernő Dohnányi made a world career from here as a pianist, composer and conductor, but he also played an important role in Hungary's musical life. The chamber music cycle of the Sopron Symphony Orchestra closes the summer season with a work by the young Dohnányi; the lively String Sextet in B flat major.